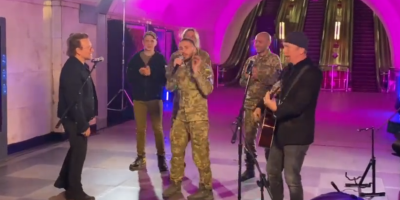 Bono and Edge from U2 performed a concert inside of the Khreshchatyk subway station in Kyiv, Ukraine over the weekend to show support for the country.

They performed Ben E. King’s “Stand By Me” as part of a 40 minute set, which included several classic U2 songs including “With or Without You”, “Bloody Sunday” and “Desire”.

They were invited by Ukrainian President Volodymyr Zelenskyy to perform and praised him during the performance.

“Your president leads the world in the cause of freedom right now,” Bono said. “The people of Ukraine are not just fighting for your own freedom, you’re fighting for all of us who love freedom.”

Here’s a clip of the duo performing U2’s “With or Without You”: