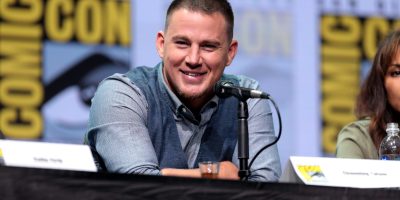 Groups of ‘sex-starved’ women have been turning up at the dance studio in London where the cast has been preparing for the film.

“It starts as a bit of fun and it’s great that the fans are so engaged. They’re just passionate – and plainly sex-starved! But after a while it has become problematic and there are now a lot of fans trying to get hold of the guys pretty much everywhere they go. The security team are concerned about what they might be prepared to do just to get their hands on them.”

Security has had to step it up big time to keep the actors safe with the amount of fans the movies have gained over the years. Some people have made it their business to follow the actors around everywhere.

Channing Tatum has said that he promises not to hold anything back when it comes to the dancing in this movie. He says he wants it to be the “Super Bowl of stripping”.