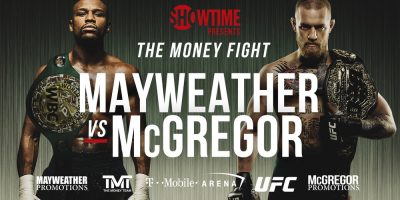 The biggest fight of the summer comes to Toronto today. Mayweather vs. McGregor kicked off their press tour yesterday in Los Angeles with an explosive first press conference. The event was uncensored and McGregor even took that freedom to the pinstripes on his suit.

The event at the Budweiser Stage (Molson Canadian Amphitheatre) in Toronto today is the second press conference in four days (they travel Thursday to New York and Friday to London, England). The event will be streamed on YouTube at around 6pm and is sure to be as explosive (and uncensored) as the first.

Warning: this conference is uncensored and the language is extremely coarse