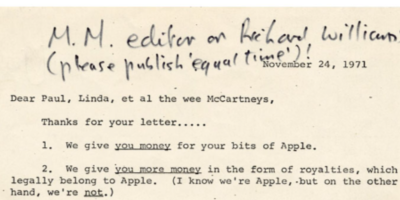 In 1971, Paul McCartney did an interview with Melody Maker magazine stating that it was John Lennon that was holding up the business part of the Beatles’ break up. In Paul’s mind, all four of them would get together and sign a contract saying that it is all done and let the business guys take it from there.

A few days later a letter from John arrived, and he had some thoughts on the article and Paul’s recent actions. From stating that Paul keeps forgetting the tax-man, and calling Paul out on his commentary on his Imagine album.

That letter is now for sale with GottaHaveRockAndRoll.com with the current bid at $30,000 and there are still 2 weeks left on this auction!

Here’s the full letter for you!