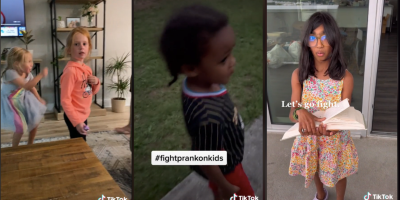 This is a solid prank. Ask your child point blank if they would drop everything and go fight with you. And what’s the age range of a child? Under 10? Seems appropriate. Don’t want them to think about it but go on impulse. Now, this new trend on the internet is not dangerous because there is no fighting whatsoever, it has a bunch of parents testing the toughness and loyalty of their offspring.

The reactions are tough to predict, are the kids ready to throw down? Do they need some convincing or do they outsmart the parent?

Here are some of the best videos on the trend. It seems like something Jimmy Fallon or Jimmy Kimmel would ask parents to do.

He had two girls and the youngest one had no fear at all. But that is certainly not always the case. It’s important to note what a kid is doing while being asked the task, and what they are giving up at that moment to fight.

Let’s say you are playing with action figures?

Yeah… this one didn’t take long, he just needed his shoes.

Now, what about a kid who is a little older and reading what looks like a textbook?

Have a look at this one where the dad sells it great — even saying it’s a seven-year-old that his four-year-old has to spar.

Lots more to see with this trend on tik tok, do you think your kid would have your back no questions asked?