It all started with host Chris Rock addressing the #oscarssowhite controversy in his opening monologue.

Leonardo DiCaprio finally won his Oscar and used his speech to address an issue very close to his heart:

Chris Rock pulled the epic dad move and sold girl scout cookies for his daughters during the show so celebrities didn’t starve to death, and somebody mistook Whoopi Goldberg for Oprah Winfrey in this amazing tweet. 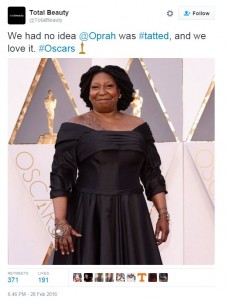 Here is the full list of the winners from last night:

Actor in a Lead Role: Leonardo DiCaprio, The Revenant

Documentary Short Subject: A Girl in the River: The Price of Forgiveness, Sharmeen Obaid-Chinoy

Actor in a Supporting Role: Mark Rylance, Bridge of Spies

Animated Feature Film: Inside Out, Pete Docter and Jonas Rivera

Actress in a Supporting Role: Alicia Vikander, The Danish Girl