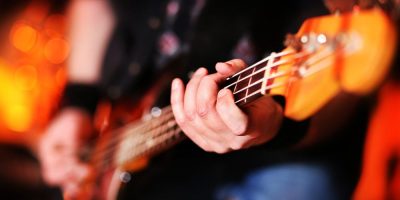 Bassists are often underappreciated and rarely get the spotlight. Which is crazy! Bassists give the song depth. Take the bass away and the song goes limp.

And sure, a bass may be easy to get started on. But it takes years of experience to become one of the best. So today I want to give a shout out to my 5 favourite bassists.

Coming in at 5, I’m going to go with Lemmy from Motörhead for obvious reasons.

Lemmy started off his musical career as a guitarist for Rockin’ Vickers and Sam Gopel Dream. It wasn’t until he joined Hawkwind in the 70s that he picked up a bass. When asked why he made the change, Lemmy shared, “I needed the job. It turned out that I was much better as a bass player than I’d ever been as a guitarist.”

Lemmy doesn’t use the single note lines of most bassists. His signature sound included a distorted rhythmic rumble, double stops and overdriven power chords. During an interview with GuitarWorld he shared, “I think I’m original, at least. I think I play like nobody else does. I always wanted to be John Entwistle, but since that place was taken, I became a lesser version.”

We’ve also got to get Paul McCartney from The Beatles on this list.

McCartney took a more melodic approach to bass and explored many different styles, though he most often used a plectrum or pick.

His style was influenced by motown artists like James Jamerson, as well as other artists like Brian Wilson and Stanley Clark.

In a 1981 issue of Playboy, Lennon talked about McCartney’s playing. “Paul is one of the most innovative bass players … half the stuff that’s going on now is directly ripped off from his Beatles period … He’s an egomaniac about everything else, but his bass playing he’d always been a bit coy about.”

Of course I have to talk about the Flea because I love me some funk bass.

Flea is best known as a founding member and the bass player for Red Hot Chili Peppers but he’s played with many different bands and musical acts.

It wasn’t until he met future RHCP lead guitarist Hillel Slovak that he was introduced to rock and bass. He quickly picked up on the instrument, developing his own funk rock style.

John Entwistle, aka “The Ox” or “Thunderfingers,” played bass for The Who. He was the only band member with formal training and used a number of techniques, including some he developed himself, like the typewriter method.

It was during live shows that he really shone. Pete Townshend has credited Entwistle for being the true rhythmic time keeper while Keith Moon showed off on drums. And he never shied away from being loud. During some performances he even rigged pick-ups to each string.

Entwistle is historic. He’s renowned for his musical skills and regularly ranks in lists for top bassists. Not to mention, he’s been a huge influence on how people play today, including my top bassists …

I would not be Canadian without saying Geddy Lee of Rush is one of the bassists of all time. He’s an amazing bass player!

Lee’s style and technique on bass has been the inspiration behind many rock artists including Steve Harris of Iron Maiden and Tim Commerford of Rage Against The Machine.

Lee started playing music around 10 or 11. Over the years he learned drums, trumpet, clarinet, piano and acoustic guitar. His love of bass came later when progressive rock was becoming big.

Lee explains, “I was mainly interested in early British progressive rock … That’s how I learned to play bass, emulating Jack Bruce and people like that.”

I’m sure that there’ll be some that disagree. But for me, these are the bassists that really made an impact.