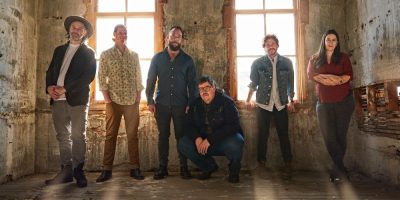 The Noella Tree Lighting Celebration is back this holiday season. The event will commence with the annual tree lighting in Meridian Place, followed by an evening of entertainment. As with past years this will include the Chamber of Commerce Santa Claus Parade. While this is an event we never miss, we’re especially excited for this year’s recently announced headliner – The Strumbellas.

This local alt rock band started out in Lindsay, Ontario. At the time, the band consisted of:

FUN FACT: Ritter and Ritchie joined the band after Ward posted a call for musicians on Craigslist.

Over the next couple of years, the band released 2 albums and played at landmark venues like Yonge-Dundas Square and Horseshoe Tavern. They also won a 2014 Juno for their We Still Move On Dance Floor Albums.

The Strumbellas quickly earned a strong local following. But it wasn’t until 2016 that they blew up on the international stage with the release of “Spirits” from their third studio album, Hope. The album went 3x platinum and led to an international tour, as well as a second Juno for Single Of The Year.

In 2019, the band released a 4th studio album, which included their SOCAN Award winning song “Salvation”.

As of earlier this year, Simon Ward is no longer fronting the band. Jimmy Chauveau replaced Ward so he could step back into a more behind the scenes role. In a statement, he shared:

“I am just not cut out to tour to the same extent anymore, and as much as I love the band, I have decided I would like to put my focus on my first loves: songwriting and being at home with my family. Stepping back from touring will let me focus on that and more, and I’m excited for everything to come. I greatly look forward to writing and sharing new music with everyone in the future.”

While Ward is no longer the lead singer, the show is sure to be a standout performance.