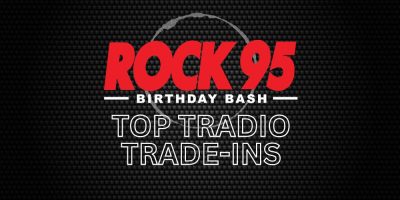 Chances are you’ve heard of Tradio Tuesdays. For anybody who hasn’t, Tradio is one of the many opportunities listeners have to get passes to the biggest, most anticipated party in Ontario – The Rock 95 Birthday Bash.

Every Tuesday, leading up to the event, listeners can trade weird, wacky and wonderful stuff for passes to the Bash.

Over the years, we have had tons of great Tradio trades. One favourite is a vintage 1970’s pinball machine, which got a lot of use from the staff before we auctioned it off. We’ve also traded passes for a custom snowboard, an Exhibition Stadium seat with a certificate of authenticity and Gord Downie’s handwritten lyrics on the back of a fax.

“The coolest thing that I think we’ve ever gotten for Tradio was the Elvis suit,” Cat shares. The suit belonged to an Elvis impersonator who traded us one of his super elaborate, beaded, baby blue jumpsuits. Cat continues, “The reason it’s the coolest is not because I am being inundated with Elvis on my Facebook because I watched the movie. It’s because I got to wear it at the Birthday Bash and that was my whole job.”

Craig has two top picks. The first was the Space Invaders tabletop game, like the kind you would have found in a pizza shop. Craig explains, “It just brought back a lot of memories. You and a buddy, buddy on the other side, video game down there (he points to where the game would be), you got a slice of pizza and life is fantastic. That’s one of my favourite things just because of the nostalgia of it.”

Craig’s other favourite Tradio is a Gemini Award that the Trailer Park Boys recieved.

“I don’t remember the story but they were ticked off at the whole ceremony process and the Trailer Park Boys ended up leaving it on a curb so somebody scooped it up and gave it away for Tradio and then we resold it. I would have liked to have bid on that one. That’s a pretty cool item there.”

This year, we’ve had a lot of amazing Tradio trades, including a:

In December, we will list all these items in our online auction to help raise funds for The Rock 95 KOOL FM Toy Drive.

To find out more about The Rock 95 Birthday Bash, head over to the event page.