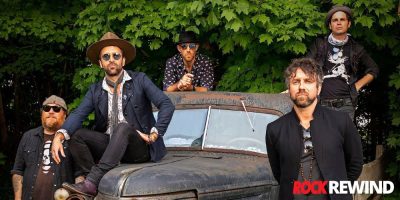 Currently based out of Hamilton, The Trews musical journey started out in Antigonish, Nova Scotia in 1997. In 2003, the band achieved mainstream success with the release of their second album House of Ill Fame.

Since then, The Trews have released six studio albums, nineteen singles and have toured extensively throughout Canada, the United States, and Europe.

Today they’re known for their high-energy live shows and hits like “Highway Of Heroes” and “Not Ready to Go”.

How The Trews Began

The original Trews line up was made up of:

The foursome were in high school when the band formed in 1997. That same year, they recorded the band’s initial EP, One I’d Trouser EP. They continued to play together until 2001, when Sean Dalton replaced Clark on drums.

In the summer of 2002, The Trews entered Rocksearch, a high-profile radio station contest out of St. Catharines. Soon after winning the contest, the group signed on with Bumstead Productions. That’s when things really started to change …

It was around this time that the band officially became The Trews.

How The Trews Got Their Name

The Trews started out their musical journey in 1997 under name One I’d Trouser. The name was a line from the “Penis Song” used in Monty Python’s The Meaning of Life.

Following the release of their self-titled EP, the band shortened the name to Trouser. According to rock history, this was at the advice of Bucky Baxter who vacationed in Antigonish and mentored the band. (Bucky Baxter is an American guitarist who played with Steve Earle and The Dukes and Bob Dylan’s backing band.)

In 2002, the band signed on with a production company but before they released their second EP, The Trouser EP, they received a cease and desist over the name. A Mississauga acid-jazz band had already claimed the name.

The band changed their name to The Trews and released The Trouser EP privately. The EP is now a collector’s item for fans of the band.

Some wonder how The Trouser evolved into The Trews but it turns out trews is a Scottish term for “trousers.” While the group was thinking up new names, Syperek’s mom recommended they just translate their old name and suggest The Trews.

John-Angus recalls the day they chose the name. “We thought that sounded pretty good … There was a little bit of a double entendre to it, rolls off the tongue nicely. And since we only had a couple of days, it was the best one we had, so that was it.”

How Everyone Responded To The Name

In Canada, the name hardly draws any attention but it has garnered a few eyebrow raises in the UK. One London newspaper even titled an article about The Trews “Great Band, Crap Name.”

Russell Brand, a British comedian, also uses the name for his online news site. Not because of it’s connection to trousers or the band but because it’s an amalgamation of “truth” and “news.”

In an interview, front man Colin MacDonald said, “[Brand’s] stolen our name for his newscast … I mean, we had a hard enough time explaining our name, and then this guy comes along.” But the band doesn’t seem phased by the questions and confusion surrounding their name. They often times joke about it themselves. They even tried to reach out to the comedian over Twitter, linking Brand to their song “Paranoid Freak” but never heard back.

Regardless of the name, the band has found major success …

RELATED: An interview with The Trews …

In 2008, the band added Jeff Heisholt to their live lineup on keyboard. Then, in 2015, Sean Dalton left the band. In an email, he said farewell to fans:

“To all the hard core Trewbadours out there: Well what can I say folks its been an amazing run. The years playing with the Trews have been best years of my life. Countless hours in the jam space and playing thousands of live shows all over the world have shaped me as a musician, and playing with such great guys has made me a better human being. I will miss it very much.

Due to unforeseen circumstances, I’ve decided to step down from the drum throne. Nothing weird goin’ on here folks…just time to do what’s best for me and the family. I wish the Trews nothing but the best, and was so fortunate to play with the best friggin’ band in the country. I’ll be hanging with you all in the crowd at the next show.”

Gavin Maguire replaced Dalton and in 2018 Maguire was replaced by Chris Gormley.

The song is about a stretch of Highway 401 between Toronto and CFB Trenton. After the first Canadian soldiers fell in Afghanistan, they were flown to CFB Trenton. The fallen soldiers were transported down the 401 to Toronto as hundreds gathered on bridges and overpasses to honour their memory.

The route soon became known as The Highway Of Heroes and is still used today to honour those who have fallen when they return to Canada.

The song was inspired by Captain Nichola Goddard. Goddard had attended high school with members of The Trews and had become friends with them. She had even hired the band to play at school dances during their early days.

In 2006 she was killed while serving in Afghanistan.

In 2017, John-Angus reflected on the day he found out about Goddard’s passing. “We weren’t living [in Antigonish] anymore when [Goddard was killed], but my mom still was, and was relaying a lot of the story, and how much the tragedy had shook everybody in Antigonish.”

The song was initially released in iTunes Canada with proceeds being donated to the Canadian Hero Fund. The fund helps provide scholarships to families of soldiers killed in combat.

Today, the song has become an anthem for Canadians remembering those they have lost.

The Trews debut album House of Ill Fame was released in 2002 and certified gold in Canada.

The album was recorded in Toronto with producer Gordie Johnson (Big Sugar and Grady) and distributed by Warner Music Canada.

The single “Not Ready To Go” reached #1 on the Canadian rock charts.

Following the albums release, the band was nominated for a New Group Of The Year Juno in 2004 and Single Of The Year in 2005 for “Not Ready To Go.”

Just before the release of The Trews second studio album, the Rolling Stones were rehearsing in Toronto for their Bigger Bang Tour. During a warm up gig at a small local venue, The Trews were invited to open for the Stones.

During an interview, Colin talks about how they ended up at the show:

“The Stones were in town rehearsing as they did many times in the past … there was a rumour that they were going to be doing a kind of warm up gig at a small club in Toronto but it was just a rumour. Our management team, at the time, had a couple of friends in the Rolling Stones’ camp but they were also aware of us just cause we were on the radio and stuff.”

Colin continued, “I remember calling my manager and saying, ‘Is there any way we can get tickets to this gig. If they’re going to do something can you please get us tickets to this show’ and I got a call later that day and my manager said, ‘The Stones are going to be doing a show, I can’t get you tickets but they’ve asked you to open the show.’ So, it was one of those kind of dream come true moments.”

A few days after the show, The Trews released Den OF Thieve in Canada. The album was produced by Jack Douglas who had worked with Aerosmith, Cheap Trick, John Lennon and New York Dolls.

The album received gold certification and the single “Yearning” charted at #1.

Following the album’s release, The Trews were invited to open for Robert Plant of Led Zeppelin during his arena tour.

The lead single, “Hold Me In Your Arms,” was debuted at the 2007 Grey Cup pre-game show. It made it to the top 10 on Canadian charts and was #1 on MuchMusic for a week in April. The song also won an award for Best Hard Rock/Metal Song at the 8th Annual Independent Music Awards in the US.

The music video for “Man Of Two Minds,” the album’s third single, reached #1 on MuchMusic and MuchMoreMusic.

The following year, the band released their fourth studio album. The album was recorded at the Tragically Hips Bathouse Studio by John-Angus and Gord Sinclair of the Hip. Mike Fraser, a Canadian who has worked with artists like AC/DC and Aerosmith mixed the album.

The single “The World, I Know” was the band’s 12th song to rank top 10 in Canadian rock radio and “Misery Loves Company” was the 13th.

RELATED: The history of AC/DC from High Voltage to Power Up …

The band’s self titled album is their highest charting debut. It reached #1 on the Rock, Alternative and Independent album charts in Canada and ranked #3 overall.

The album was a unique for a few reasons. Firstly, it was made possible by a crowdfunding campaign. It also features background vocals from fans of the band.

The following year, Dalton would leave the group and be replaced by Gavin Maguire.

In advance of their next album, The Trews released “The New US,” “Vintage Love” and “Bar Star.’ The first of the three was very political and sparked some controversy. The band described the song as:

“A call-to-arms for us all to try and cut through the static, noise, clutter and b.s. of the insane times that we find ourselves living in and hopefully seek out a little truth for ourselves in the process…or at least give you something to head bang along to in frustration in the meantime.”

In September 2018, Civilianaires was released. It debuted at #1 on the Alternative charts and #6 overall. It was also the first album to feature drummer Chris Gormley.

At the beginning of the COVID-19 Pandemic, the band created a music video for a previously unreleased song called “God Speed Rebel.” The song was record in sessions with Derek Hoffman following the recording of Civilianaires.

The video was filmed using Zoom and all proceeds from went to the Unison Benevolent Fund to support those in the music industry during times of need.

Later, in 2021 they released “I Wanna Play.” The song was about all the things we were missing during lockdown and was later included in their 2021 album release, Wanderer.

During an interview, John-Angus shared, “This is a really strong rock record from start to finish. Every song was mulled over extensively. The pandemic bought us more time which you always need with songwriting. There are songs that would not be on this record had it happened another way.” Colin MacDonald adds, “We accidentally honed our recording skills because there was no live show to get to.”

From their inception in 1997 to their latest album release, The Trews have truly made a name for themselves on the Canadian music scene and continue to grow internationally. 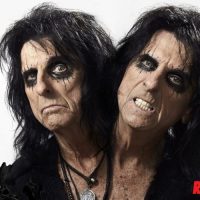 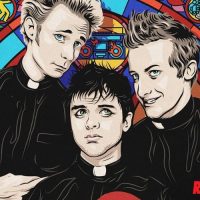 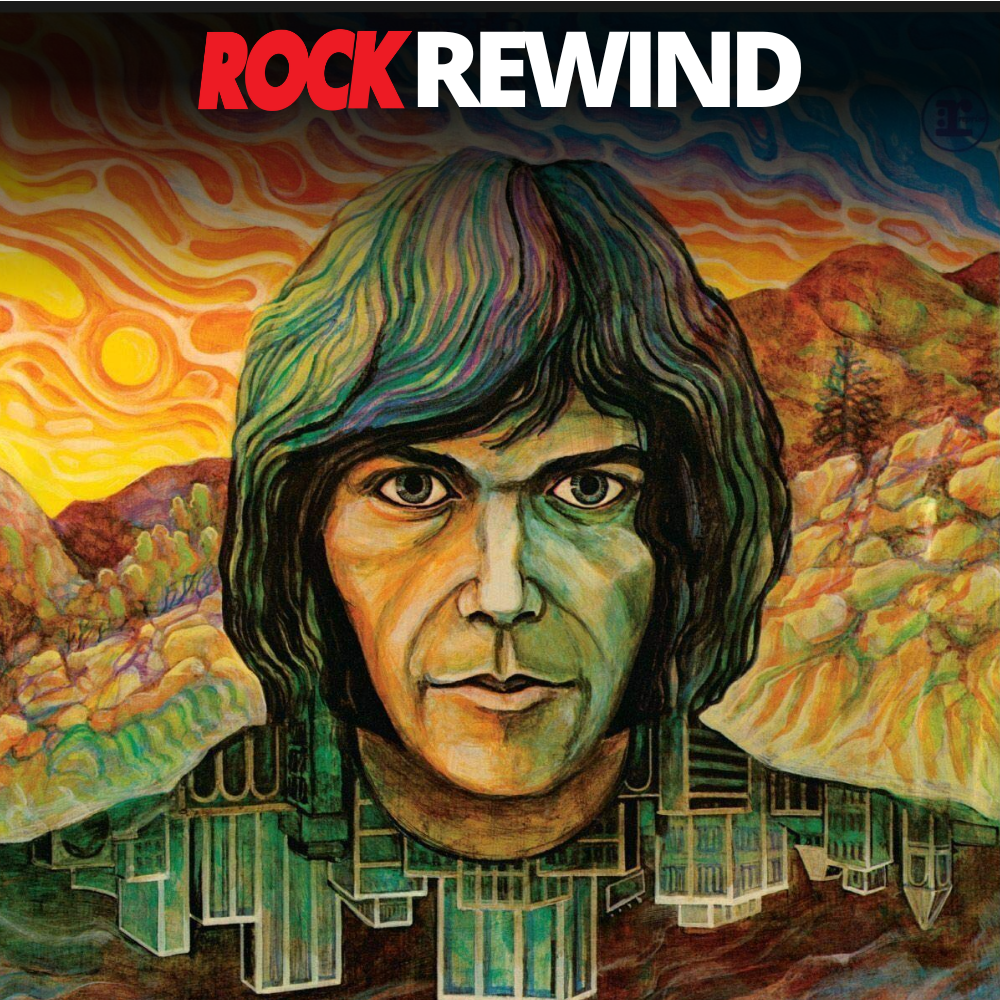