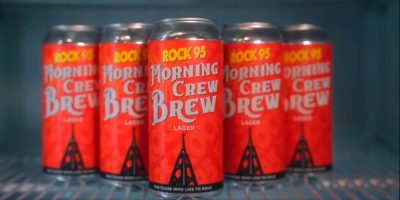 At Rock 95, we set out on a journey to brew our very own beer … the Morning Crew Brew!

We wanted to create a drink that encompassed Cat’s sarcasm, Bryan’s over confidence, and Craig’s good to average looks.

But apparently … that was in no way possible … and probably a bad idea to be honest.

So instead … we made a clean, crisp, light lager and we’re pretty darn happy with it.

For fans of rock and fans of beer – Find the Rock 95 Morning Crew Brew today at The Collingwood Brewery.

Must be legal drinking age.

Where To Get The Rock 95 Morning Crew Brew

The Morning Crew Brew will be available in bars across Simcoe County. As more locations start selling it, we will add it to this list. For now, it’s only available at Collingwood Brewery.

About The Rock 95 Brew By Collingwood Brewery

In 1987, a fella named Doug Bingley was awarded an FM radio licence. Along with a number of other lunatics, he created Rock 95. The rock has not stopped since. Computers have replaced typewriters; hard drives have replaced vinyl, tape and CDs, but Rock 95 remains true to the fist-pumping, high-fiving spirit of rock & roll. So let’s celebrate with a beer; our own beer. Introducing Morning Crew Brew – a crushable light lager that pairs perfectly with Barrie’s Rock station; Rock 95.