The WWE has been continuing operations out of their training facility in Florida since March.

They’ve continued to put on shows weekly, including WrestleMania with no fans present.

USA Today reported that an unnamed developmental talent tested positive for the virus, which lead to a temporary suspension of operations for the WWE.

The wrestler in question apparently last appeared at the training facility on June 9th and no others have reported symptoms.

The WWE says as a result of this incident, they’ll be testing all employees who have appeared at the training facility.

No word on when production will resume. 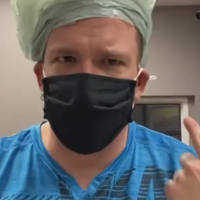