Why lighting should be just as important as color/material selections!! #interiordesign #learnontiktok #designertips #colortheory #shopwithme

It’s like a Canadian or Winter edition of “the dress” from years back. Remember the dress? The one that divided the internet about whether it was white & gold or blue & black? Well this is THAT controversy, only on steroids…or on too much rum-nog.

An interior designer, Otelia Carmen, claims she bought this hat in a store because it was green, but when she got home and under her living room lights, it was red. But, plot-twist…in natural light, it’s actually brown. This video captures all the different colour-changing iterations, but I call shenanigans! And so do many people on the internet!

According to experts, it’s an actual phenomenon called “metamerism” (meh-TAMM-er-ism), where things will indeed appear different, depending on the “temperature colour” of the light. So, warm lights vs. harsh cold light etc…but I still don’t buy it.

First of all, there seems to be a point in the video right before the hat turns green that could easily be a cut & edit. And secondly, this woman is an interior designer promoting her business in a sideways, social-media way, by highlighting the importance of the right kind of interior lighting.

People can argue about blues & greens, because they’re so similar and human’s eyes vary, but a brown or red hat turning to green? Naw, I don’t believe it. So, while the infamous “dress” was a legit phenomenon that polarized people, and the lesser known AUDIO controversy of “yanni vs. laurel” pit people with different ear pitch receptors against each other, I just don’t think this video is legit. But I’m a cynic who sometimes thinks everything is a conspiracy. 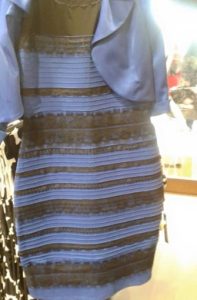