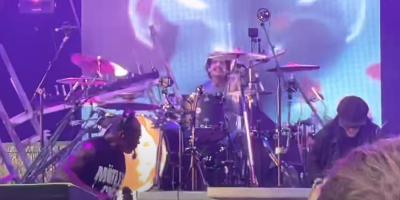 There’s more drama surrounding Motley Crue’s tour. This time a video appears to show the band using a backing track for drums. It looks like Tommy Lee misses his cue for the song “Looks That Kill” as he’s scrambling to sit behind his kit as you can hear the drums start playing.

At the beginning of the tour Lee announced that he’d broken four ribs and would be unable to drum. He sat out a few shows mainly sitting at the piano or just drinking on stage while the band played. He’s been powering through and playing the full set each night since June 29th though.

The video shows the transition between the songs “Live Wire” and “Looks That Kill”. Lee’s drum tech is adjusting his drum kit as Tommy Lee scrambles to get behind the kit for the beginning of the song.

You can hear the cymbal sound before Lee even has drum sticks in his hands in the video. Check it out for yourself: