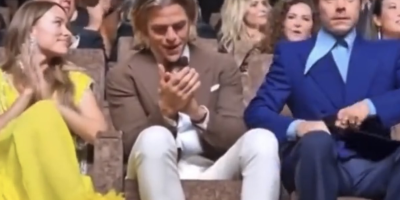 The film “Don’t Worry Darling” has been shrouded in controversy for months now. Starting with Shia LaBoeuf who was originally cast in Harry Styles’ role. Olivia Wilde said he was fired because he had a “combative energy” and that she had a “responsibility to the production and to the cast, to protect them”.

Later LaBoeuf released a video saying he actually chose to quit the production and even went so far as to get Florence Pugh caught up in the crossfire. Sharing a video of Olivia Wilde hinting at tensions with her saying, “This might be a bit of a wake-up call for Miss Flo, if she really commits, if she really puts her mind and heart into it at this point and if you guys can make peace … what do you think? Is there hope?”

The drama thickens with the affair going on between Olivia Wilde and Harry Styles. She broke up with her fiancé Jason Sudeikis in November 2020 and met Styles while shooting Don’t Worry Darling. They were seen holding hands two months later.

Apparently Florence Pugh was irritated at seeing Wilde and Styles all over each other on set. That’s neither confirmed nor denied. But there are also rumors there was pay disparity between Pugh and Styles.

Fast forward to the Venice Film Festival where Florence Pugh skipped the prescreening press conference. The reason she skipped it was because her flight didn’t land until after the conference. Fans are speculating that it was because she wanted to avoid promoting the film or talking about the controversy.

Now that you’re caught up, please look at this video of Harry Styles and Chris Pine sitting down to watch the film. It looks VERY MUCH like Styles spits on Pine when he sits down.

Reps for both actors deny the incident. If you’re still convinced he’s spitting, someone shared another angle of the interaction showing the two chatting after Styles takes his seat.

Let’s spread lies because it gets likes on twitter https://t.co/OJRlWUm0KJ