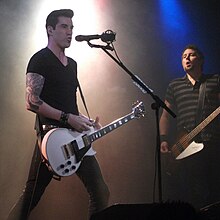 Just Announced!  ROCK 95 and Impact Live is proud to present Theory of a Deadman coming to the area next spring!  The Vancouver rocker’s will stop down in Barrie in early May to perform at Maverick’s Music Hall in downtown Barrie.

The band is currently touring their new album Wake Up Call which was released at the end of October.  The first single RX has been burning up the charts for the band topping the Billboard Mainstream Rock charts in the U.S. and Canada.

The date of the Barrie show is set for Thursday May 4th.  Tickets go on sale this Friday Nov.24 at 10am through Ticketfly. Be listening all this week for your chance to Beat the Box Office and win a pair of tickets before they even go on sale.