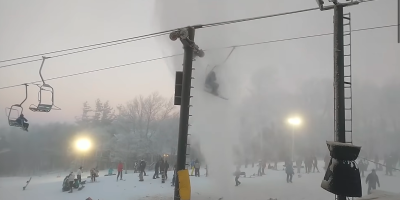 Tough time for the people at Beech Mountain today. 🥶 pic.twitter.com/fg671LruRn

This is one of the most insane videos you’ll see this week. A ski resort in North Carolina had a skier hit a hydrant on the hill, which ended up spewing water 15 feet (at least) into the air. Even more of a problem, was where the water was peaking happened to be where the chairlift moves across overhead. You can see various clips of skiers getting absolutely blasted by the burst pipe, and some skiers even spending an extended period of time in the icy shower.

The resort said in a statement that two people were taken to an area hospital by Avery County emergency medical workers with what appeared to be injuries that were not life-threatening. The person who skied into the hydrant was not injured.

Here is the full clip.