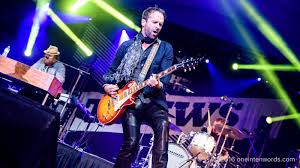 The Trews open up the 2017 summer concert season Saturday night at the legendary Kee to Bala nightclub in Muskoka as ROCK 95 launches the 95 Days of Summer this Victoria Day holiday weekend.

This summer, the Kee to Bala is celebrating it’s 75th year of operation as one of the best summer night spots in Canada.  The Trews have become a Canadian main-stay on the regional music scene with a loyal following they have built up since the release of their debut album in the early 2000’s.  Over the years the band has logged countless kilometres touring and performing and have a lot of story’s from the road.  Here’s one story the band thought was one of the funnier things that had happened to them while they were performing in the States.

Tickets available for the Saturday night Kee to Bala performance by clicking here and also, be listening this week with ROCK 95 for a chance to win tickets to check out the show Saturday night.