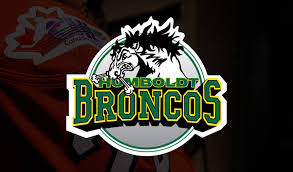 There was no puck drop at centre ice last night at the arena in Humboldt Saskatchewan. Instead, bouquets of flowers encircled centre ice as town residents gathered to remember the victims of the crash between their junior hockey team’s bus tractor-trailer. Fifteen people players, team staff and a radio play-by-play announcer were killed…

Team president Kevin Garinger noting the families, the players’ billets and the town itself are not alone in their grief with support coming in from across the country – not just for them, but for the first responders who attended the scene and for the driver of the truck involved.

The police investigation of the crash continues.

“Prince Philip and I were saddened to hear word of the crash involving the Humboldt Broncos hockey team,” Her Majesty said.

To the entire Humboldt Broncos hockey community: We are here for you. As neighbours, as friends, and as Canadians, we grieve alongside you. Statement: https://t.co/jKloGgn5io