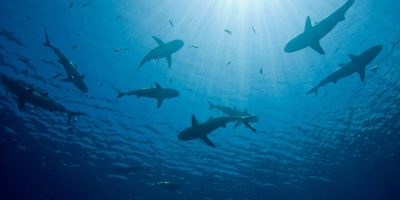 Move over Sharknado, Monkeypox, Covid, and American BS. The latest fear, that’s here, is the eruption of a “Sharkcano”!

🦈 You’ve heard of sharknado, now get ready for sharkcano.

The Kavachi Volcano in the Solomon Islands is home to two species of sharks. It’s also one of the most active submarine volcanoes in the Pacific, seen here erupting underwater by #Landsat 9.https://t.co/OoQU5hGWXQ pic.twitter.com/vEdRypzlgi

Okay, so NASA detected the eruption of this underwater volcano, so what? Unlike the spectacular, seen-from-space underwater volcano that erupted a couple months ago, this one is crazy because of what it may have released into the world!

Straight out of a science fiction movie, the underwater volcano gets the name “Sharkcano” because it houses a species of shark…that have mutated due to the extreme conditions.

Are these sharks super sharks? Can they withstand bomb blasts and artillery shelling? Are they now going to haunt the coasts of countries all across the world? Makes for a good movie, doesn’t it?