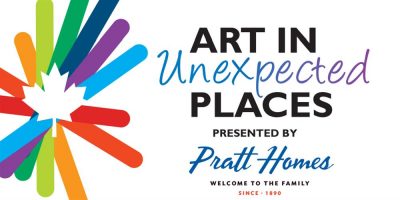 The City of Barrie has been transformed by a series of public art installations around the city’s downtown core. The free Illuminate Barrie – Art in Unexpected Places exhibits are part of Barrie’s Canada’s 150 celebrations.

Soapbox by Chris Hanson & Hendrika Sonnenberg can be found at the Downtown Transit Terminal, 24 Maple Avenue.

A series of five art installations from Canadian contemporary artists are planned for the summer with three having launched at the start of Canada Day weekend. The installations, organized by the Barrie Public Art Committee, are placed largely around Memorial Square.

Carol-Ann Ryan, the Vice-Chairperson of the Barrie Public Art Committee expressed in a statement that the exhibit “…will bring elements of spectacle and introspection to citizens and visitors alike,” and that it is imperative “…to do something out of the ordinary in our city because [the sesquicentennial] marks a turning point [for our nation].”

Rabbit by Ryan Park, a shadow puppet show can be found at 9 Clapperton Street, just north of Dunlop Street.

To see the exhibits for yourself, you can follow a self-guided tour by downloading a map on the City of Barrie’s website. Three of the five displays can be seen now, with two more launching closer to Labour Day weekend. The exhibits will be displayed until September 4th.