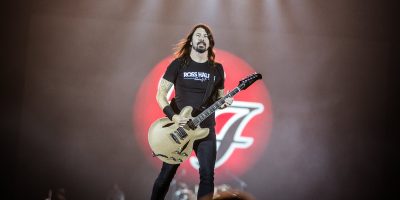 Philadelphia Flyers goalie Carter Hart paid tribute to his dad and the Foo Fighters in the most adorable way. He says he’s got specific memories of his dad driving him to hockey practice, listening to the Foo Fighters.

They’re his dad’s favourite band and so in honour of his relationship with his father and to pay tribute to the late Foo’s drummer Taylor Hawkins, he debuted a brand new goalie mask.

He teamed up with Pennsylvania-based artist Franny Drummond to paint the mask. They’d worked together previously for another music-themed mask honouring Tim McGraw and AC/DC.

The mask features pictures of Dave Grohl and Taylor Hawkins on either side of the helmet, with the Foo Fighters logo featured on the top.