At 8:07 this morning Wiarton Willie the famous Canadian groundhog emerged from his burrow to make his annual prediction of either an early spring or six more weeks of winter.

Just after daybreak in Wiarton Ontario officials gathered to make official proclamations, dignitaries were on hand and on-lookers came out to see what the prediction for the winter of 2016 would be. Would Willie see his shadow meaning six more weeks of winter, or would he not see it meaning an early spring? 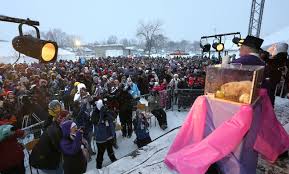 While it was fairly cloudy here in Barrie, Wiarton Willie did in fact see his shadow this morning which traditionally means we’ll be facing another six weeks of winter to come.

In actual fact, if we were to only get six more weeks of winter, we’d consider THAT an early Spring around these parts. Generally, we’re more likely to see 8-10 more weeks of the cold and white stuff.

So, while Ground Hog Day is supposed to lift the spirits of those who have been finding the winter dragging on with hopes of an early reprieve, around here we just kind of shrug and winter on.