Almost every holiday is an excuse to eat & drink, but there is only one that requires the consumption of delicious Mexican food & beverages and that’s Cinco De Mayo.

Don’t mistake Cinco De Mayo for Mexico’s independance day (that’s September 16th). The holiday actually commemorates the Mexican Army’s unlikely victory over French forces at the Battle of Puebla on May 5, 1862. Cinco De Mayo has taken on larger significance in North America over the years, as a celebration of Mexican culture.

We are ALL about celebrating here at Rock 95, so in the spirit of Cinco De Mayo we decided to throw a little mid-day celebration, complete with burritos, chips, salsa, margaritas and (of course) tequila. Yes, we know – it has been a tough day at the office.

Quesada Burritos & Tacos in Barrie were kind enough to supply us with some delicious Burritos. Randy Richards took one for the team and went to pick them up. Randy is the best, and if anyone tells you different they are lying! 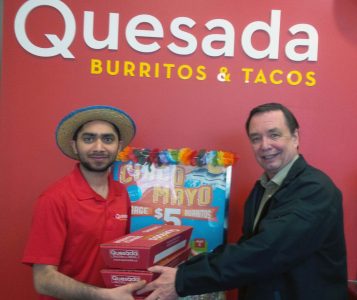 While Randy was out picking up lunch, the office “Fun Patrol” (yeah, we gave ourselves a name. So?) were hard at work, putting the finishing touches on our lunch room. Some Christmas lights went up, lemons were sliced, sombreros distributed and we were ready to go. 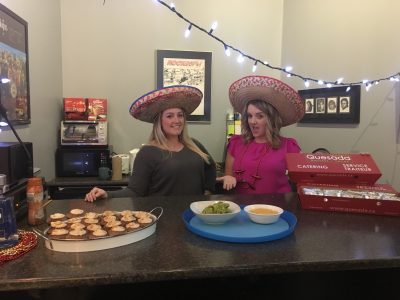 Wondering what kind of cupcakes those are? They’re churro cupcakes, they were made by our promotions assistant Victoria and they were spectacular (no, there are none left). You can find the recipe here.

I know what you’re thinking, and yes, it WAS a tough day at the office. Good thing we’re not afraid of hard work. Now that we had our decor and our burritos, there were just a few finishing touches left. OK, there was one finishing touch – beverages. Margaritaville Classic Margaritas from Landshark Canada were the perfect addition to our pop-up party. Burritos and a frosty margarita, what more could you ask for? Not much on a Friday, that’s for sure!