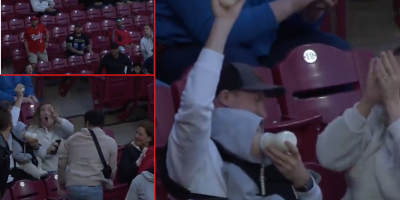 Before you say how incredible this father is for making a fantastic catch, you have to wonder if that’s the spot to bring a baby to? The baby looks under one year…do you bring a baby to a concert? How about a sporting event? This father’s catch went viral for his coordinated catch, but you have to wonder, what if he didn’t make the catch? I have seen babies at events before, and I don’t think that’s going to stop anytime soon, but I wonder if it is the best environment to bring a baby to? If this guy screws that catch up he would be going viral for a different reason. But that’s something we don’t have to worry about…for now.

Guy caught a foul ball while feeding his baby. Legendary.