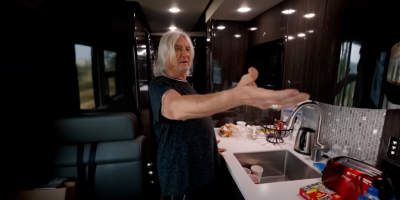 Where does a tenured rockstar lay his head after a big night on the stadium tour? Not in a hotel apparently. Poison, Joan Jett, Motley Crue and Def Leppard have been touring all summer long from stadium to stadium which means many months of the road, and for some members, that’s the way they like it.

Last month the stadium tour went through Edmonton, and this video was filmed. You’ve likely seen a huge blacked-out tour bus before, but you can’t see inside when they are blacked out, until now. So Joe Elliott of Def Leppard takes us onto his tour bus which acts as his second home on the road and a place where he sleeps every night.