Just announced!  One of the most fun shows you’ll get a chance to see this summer, and it’s coming to Barrie!  Buckcherry, P.O.D., Lit and Alien Ant Farm have joined forces for the Gen-X Summer Tour, a 33 City tour that starts in Milwaukee in late June.

Last week the ROCK 95 Morning Crew announced that the Gen-X Tour will stop down at Maverick’s Music Hall in the City’s downtown on July 31st.

Be listening with ROCK 95 for a chance to WIN tickets to the show and to hear more from Josh Todd of Buckcherry in conversation about this Summer’s Gen-X Tour, click here. 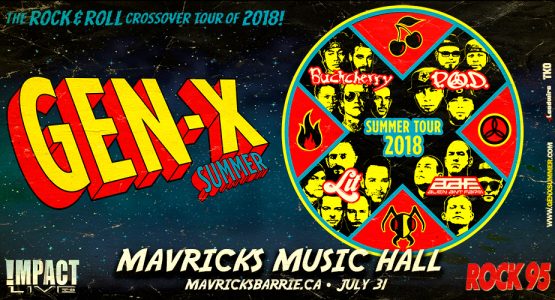