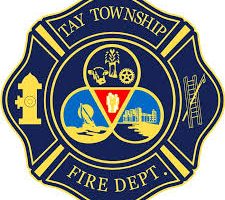 A 44-year-old woman and three boys, ages 7, 11 and 17 have been transported to hospitals in Toronto after an overnight house fire in Tay Township. Firefighters, OPP and Paramedics were called to the Neilson Road address just before 11 pm. The home was fully engulfed in flames with reports of people trapped inside, while Tay Township says working smoke detectors helped four people escape before emergency crews arrived. Firefighters were able to locate and remove a woman and 7-year-old child after that. Three of the victims suffered serious injuries. The 17-year-old is being treated for life-threatening injuries. Cause of the fire has yet to be determined. The Fire Marshal’s Office is investigating, a cause and damage estimate have yet to be determined.