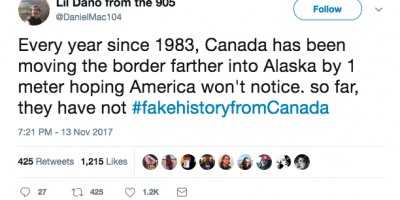 The hashtag was started by a Canadian online news satire site The Beaverton to celebrate the release of their new book. It was a top-trending topic in Canada last night.

To celebrate the release of our book we're going to play a round of #fakehistoryfromCanada– tweet your best fake Canadian history and we'll RT our favorites! pic.twitter.com/SttkqA7W8M

Canadians were invited to use the hashtag and we totally did! It’s pretty awesome that we can make fun of ourselves.

Check out some of the top tweets here:

One hundred years ago today Canada decided "eh" would be the sound the question mark makes. #fakehistoryfromcanada

Every year since 1983, Canada has been moving the border farther into Alaska by 1 meter hoping America won't notice. so far, they have not #fakehistoryfromCanada

A group of Canadians is called an "apology" #fakehistoryfromcanada

Our front doors open to reveal our refrigerators #fakehistoryfromcanada pic.twitter.com/go6DoSzX4G

#fakehistoryfromcanada Newfoundland was bought and paid for with Canadian Tire money

#FakeHistoryFromCanada Neil Young wrote the national anthem, but they had to cut out the ten minute guitar solo.

Mounties only ride horses in ceremonial settings. When on active duty, they ride moose, which are larger and stronger and better able to chase criminals (mostly syrup thieves) across the tundra. #fakehistoryfromcanada

Today marks the 200th birthday of Lord Tim Horton, Father of Confederation. Lord Horton invented the great Canadian pastime of Hockey in 1875, and while serving as Prime Minister, won the first ever NHL championship playing for Toronto in 1880. #FakeHistoryFromCanada pic.twitter.com/HMdX5TyGiL

What would you add?