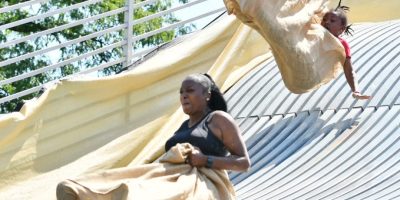 the “Giant Slide” in Belle Isle Park in Detroit has reopened after being closed for two years.

It originally opened in 1967, then was replaced with a new version in the 80’s and is now being run by Michigan’s of Natural Resources and an amusement company called Healthy Kidz Inc.

The slide reopened last week and had to be shut down just a few hours later because of how fast people were going down.

The giant slide at Belle Isle Park in Michigan was open for only 4 hours before workers shut it down to make adjustments.

I wonder why they decided to do such a thing 😳 pic.twitter.com/q7jpFdLdAO

@theyadorexensia 😂😂😂😂 #fyp #belleisle ♬ original sound – my phone and back are fine😭

Apparently before they reopened the Department of Natural Resources “scrubbed down the surface” of the slide and sprayed a little water on it between rides to help control the speed.

There’s nothing wrong with the Giant Slide on Belle Isle. It’s not broken.
These young kids just don’t know how it’s done. The “older” kids do. 😂 #Detroit pic.twitter.com/iMTY2hyNA3