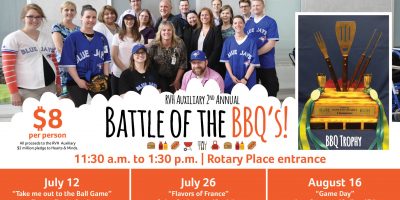 What you have for lunch today could be good for your heart and mind…or someone else’s.

The second annual Battle of the Barbecues begins today at RVH. Lise McCourt of the RVH Auxiliary says it’s a friendly competition between departments at the hospital to raise funds for the Hearts and Minds Campaign. Last year, the Auxiliary raised $13,000 for the cause.

The event is today as well as Thursday, July 26 and Thursday, August 16 between 11:30am and 1:30pm outside Rotary Place across the main entrance of the hospital. Everyone is invited.

McCourt says while it is billed as a friendly competition, the departments taking part have been known to try different things to get an edge – sneaking in secret sauces, setting up photo booths, and one team last year had someone playing a ukelele hoping to draw people in.

The team that brings in the most money is awarded the trophy.