Most of the best women’s golfer’s in the world are in our regional area this weekend  competing at the CP Canadian Women’s Open Golf Championship being held at the Magna golf club in Aurora.

All eyes will be on one golfer in particular, who already at the age of just 21 has  emerged as the best golfer Canada has  ever produced having already produced nine LPGA tournament wins and is the defending Champion of this week’s CP Canadian Women’s Open, which she won last year in Regina, Saskatchewan.

Brooke Henderson is not only one of the best golfer’s in the world, she is also an amazing ambassador for both Canada and the game of golf in general.  With her sister Brittany by her side as her caddie, the Smith Falls Ontario natives have traveled the world together and have become a regular sight among the elite golfer’s of the world, all at the same time remaining true to their Canadian roots. 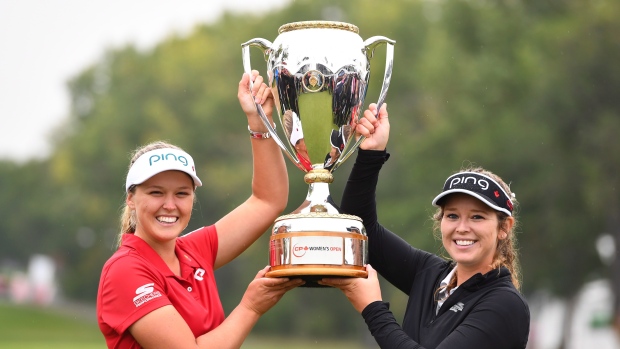 Last year in Regina, Brooke Henderson was laser-focused as she rorared out to a big lead, and then had to carefully steer it home on Championship Sunday with crazy Canadian fans cheering her along for her 7th tournament win and breaking out into a rendition of Oh Canada at the Wascana Golf and Country Club.

Already with more tournament wins than any other Canadian golfer in history on either the men’s or women’s side, can she extend that lead and once again come up big once again in her home Country?  We’ll find out this weekend in Aurora.