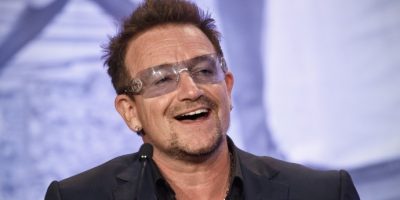 Named after an American submarine & plane designation, U2 have been a polarizing rock band for years, mostly for their sound…as is the case with most international superstars. (You can’t please everyone, and there’s 8 billion people on the planet)

However, some people have debated the “coolness” of the name U2 over the years as well, and Bono himself isn’t a fan. He blames a lack of understanding in wordplay & grammar, citing not “getting” that the Beatles was a pun. He didn’t know that so many people would take it to mean “you too”…reminding me of the old pick up line: “If I could rearrange the alphabet, I’d put U & I together!”

But it’s not just the name of the band, but also his own voice which Bono isn’t the biggest fan of. He claims early recordings show his voice was strained and not technically talented. He says he’s only become a good singer “recently”, which is ironic, because Paul Hewson gave himself the name Bono after seeing an ad for “Bono Vox hearing aids”, with Bono Vox translating to “beautiful voice” in Latin.

So, should the Edge start picking up some more vocal duties? Should the band go back to calling themselves Feedback (their original 1976 name) or how about The Hype, as they were very briefly known as? Or should they just let let their musical legacy speak for itself and leave well enough alone?

Hear the man himself complain about his voice & band name: