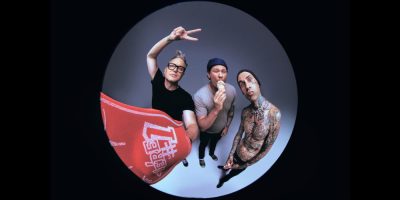 Blink-182 helped pave the way for pop punk to become mainstream in the 2000s. Much of this is attributed to their straightforward approach, catchy melodies and simple arrangements. The New York Times even said that, “No punk band of the 1990s has been more influential than ‘blink-182’.”

Finding their start in Tom DeLonge’s (vocal and guitar) garage is 1992, the band has had a few personnel changes. Following the 1998 release of Dude Ranch, drummer Scott Raynor was fired by Tom DeLonge and bassist Mark Hoppus.

Needing a drummer for their upcoming tour, DeLonge and Hoppus pulled in Travis Barker from The Aquabats, who were touring with the band. The position was originally temporary, but by July 1998, Barker was a full-time member.

Over the next 17 years, the trios played together and released 4 more albums. However, in 2015, DeLonge decided to leave the group. It wasn’t until 2019, that Barker revealed why. In an interview with Joe Rogan, Barker explained DeLonge had left blink-182 to pursue his passion for UFOs and his company To The Stars… Academy Of Arts & Sciences.

The Original Blink-182 Lineup Is Back With Some Exciting News

On October 11 of this year, DeLonge announced his return to blink-182 along with some other exciting news. The first is that the OG group members have released a new single from their upcoming album, which comes out in 2023. The lead single, “Edging”, drops today (October 14).

If that wasn’t enough, the blink-182 has also announced a global tour, which will be their biggest ever. The blink-182 global tour will include stops in Latin America, North America, Europe, Australia and New Zealand.

While most of North America’s tour will take place in the US, there will be 5 Canadian stops, with the band heading to Toronto, ON on May 11, 2023.

This is the first time in close to 10 years that the trio has performed together and it’s sure to be something great.

To get tickets to one of their shows, head to blink182.com at 10 am local time on Monday, October 17.