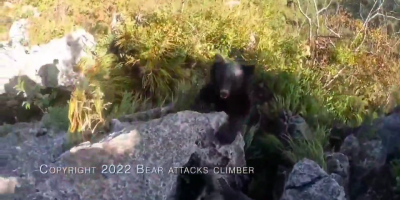 A rock climber seems to be enjoying his day when a bear comes and says hello. However, a bear says hello in an aggressive way, by attacking the climber.

There are a few things to note once you’ve watched the video over 10 times, like why did the bear attack? You can see one cub below him and off the left foot of the climber (bottom right of screen) so being too close to her cubs was likely a factor.

Also, it looks like a black bear, rather than a brown or grizzly, which likely contributed to the fact the climber still has his life.