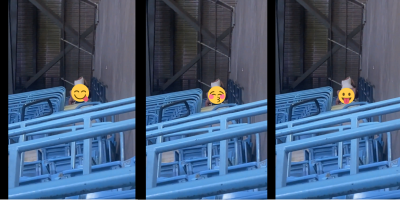 This is a funny trend that started in Oakland a week ago. Sometimes, baseball games can get a touch long, and a little boring, certainly in Oakland, and fans there a week ago decided to get a little handsy. You know how when there’s a crappy horror movie playing in the theatre late at night and teenage kids go to the back row and keep each other occupied instead of watching? It’s like that — except in broad daylight.

Check out this video captured Monday night at the Rogers Centre where two fans went for the ‘in the park’ home run in the 500 level.

The amorous duo is said to have been escorted out of the game, but police say no charges were laid.

Looks like the police broke up the party when it was still in full swing. That should warrant a boo from the crowd. It’s gross, but it’s funny and I think it’s a badass reason to get kicked out of a ballpark—one hell of a story to tell.