While the eastern seaboard of the Unites States were dealing with a severe blizzard this past weekend, a different kind of blizzard was hitting the Barrie Molson Centre yesterday. The Canadian Lacrosse League Champion Barrie Blizzard staged their home opening game yesterday afternoon against the Oshweken Demons.

The defending champion Blizzard opened their season on the road January 15th with a rematch of the 2015 Creator’s Cup final between the Barrie Blizzard and the Ohsweken Demons. The Blizzard used a stifling fourth quarter defence to pull away and go on to a 14-12 victory in that game. Shane Scott would be named Offensive Player of the week for his 6 goal performance in the season opener.

Then, this past weekend, the Blizzard had back-to-back games including Sunday’s Home Opener at the BMC, but first they would have to travel to Oshawa to take on the Durham Turfdogs on Saturday before returning home on Sunday to face Osheken for a 2nd time.

Despite a big effort Saturday, the Blizzard dropped their game to the Turfdogs 13-9. Last year, these two teams split their season series 1-1. The Blizzard then returned home to the Barrie Molson Centre for Sunday’s match up with Oshweken and thrilled the home town fans with a 20-16 win. The first 100 fans received a commemorative championship banner to celebrate last season’s Championship. The defending champions are now 2-1 for the season.

The Blizzard will hit the road this week to the Syl Apps Community Centre for the first of two back-to-back games against the Southwest Cyclops on Friday night. Their next home game is against the Cyclops again on Sunday February 7th at the Barrie Molson Centre.

For individual advanced and group tickets call 705 716 4694 or email blizzard@canadianlacrosse.com. Tickets are also available online at www.ticketpro.ca or at the Barrie Molson Centre Box Office on game day. 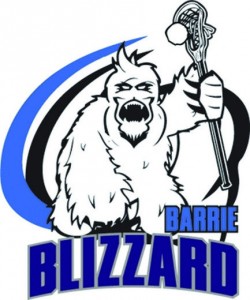