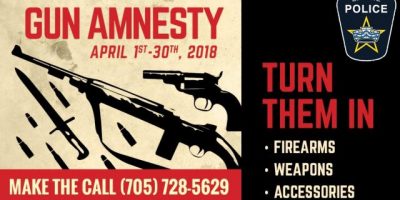 Got guns laying around? The OPP, Barrie and South Simcoe Police want them. They’re offering a gun amnesty this month. Barrie Constable Sarah Bamford says it’s a safety issue – to get unwanted guns off the street – but also reducing the risk they might be stolen. in a break and enter.

Guns, ammunition, accessories can be handed in – no questions asked. However, there is no amnesty offered for people who turn in weapons that have been used in the commission of a crime. No anonymous submissions will be accepted.

Police ask that you not pack these weapons into a car and drive them to a police station yourself. Call them to arrange a pick-up.

“The gun amnesty program is supported by police services across the province. This program provides people with the opportunity to voluntarily and safely dispose of unwanted or illegally-owned firearms, weapons, accessories and/or ammunition. Public safety is our top priority, and the amnesty provides the opportunity to reduce the number of firearms and related equipment in our community, enhancing public safety and police officer safety”
– Barrie Police Chief Kimberley Greenwood

“We are supporting this province-wide initiative because community safety is everyone’s responsibility. Ontario has seen an increase in break-and-enter incidents where firearms are stolen. South Simcoe Police Service and our policing partners are providing a safe way to dispose of unwanted weapons and related equipment so they don’t fall into the wrong hands.”
– South Simcoe Police Chief Andrew Fletcher

“Ontario has seen an increase in break-and-enter incidents where firearms are stolen or targeted by criminals. The OPP and our participating police partners are giving people a safe way to dispose of weapons, imitation weapons and related equipment, accessories and ammunition to reduce the number of guns in their communities.”
– OPP Commissioner J.V.N. (Vince) Hawkes