One thing we learned at the opening of the Academy Awards when Queen performed with Adam Lambert was which Hollywood actors can dance!

It’s Hollywood’s biggest night of the year.  All the big stars come out all dressed up in their finest for red carpet interviews at the Dolby Theatre in L.A., and then to later see if they will be bringing home the coveted Oscar trophy to display on the mantle back at their mansions.

Myself, I always think it’s fun to record the Academy Awards, and then play them backwards to watch all of those big stars giving their Oscars back to the presenters, but for movie buffs it’s a big night to see which of the latest crop of movies and their associated actresses and actors will take home the hardware.

It was a good night for a couple of Canadians. Toronto-raised director Domee Shi picked up her first Oscar for the 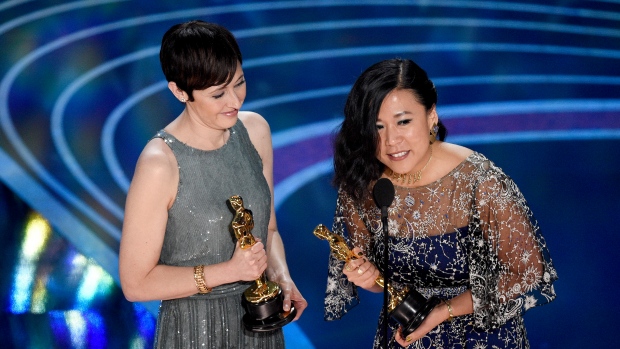 animated dumpling tale Bao, In her acceptance speech she encouraged future directors to persevere when she said “To all of the nerdy girls out there who hide behind their sketchbooks — don’t be afraid to tell your stories to the world.”

Canadian sound-engineer Paul Massey also won his first Oscar for his work on Bohemian Rhapsody. He won the trophy alongside Tim Cavagin and John Casali in the best sound mixing category.  If you saw the movie, you know how incredible the sound mixing was.

The night runs late and movie buffs who stayed up until the very end of the broadcast will be starting their work week a little blurry-eyed as they fight through the blizzard to get into the office this morning, whereby the big stars will be be getting their beauty-rest this morning after a long night of partying and waiting for the next award-winning script to arrive.