Well, we made good use of that extra hour sleep we got on the weekend.  It was a welcome addition to the weekend and much needed after ROCK 95’s 28th Birthday Bash Friday night.

There was a lot of energy in the recently renovated Maverick’s Music Hall as the anticipation of who in attendance was going to be $200,000 richer a little bit later in the evening, and the night opened with an introduction of the staff and right away a number of contestants had a chance to win $200 cash if Ozz could correctly answer some trivia questions.  He did, and they won and the night was underway.

Big Sugar opened the evening with Gordie Johnson sporting his double-neck guitar and new shorter clean-shaven look perhaps the result of a new female presence and his current girlfriend joining the band.   Big Sugar rocked the house with their great reggae-rock classics and then the prizes started to flow.

Tom Cochrane with Red Rider and featuring long time friend and extraordinary musician Kenny Greer performed the back half of the evening’s entertainment.  Tom, a great Canadian and humanitarian is one of Canada’s special musical gems and didn’t disappoint the crowd with his story telling and long catalogue of music to draw from.  At the end of his set, he pulled Gordie Johnson and his girlfriend up on stage to join in on a crowd sing-along of Life is a Highway followed by a couple of encore numbers before the stage was set for the Grand Prize giveaway of $200,00.  A chance for a lucky person to Burn their Mortgage or spend it any way they want.

In the end, the final draw of the night was made and Jeff Webb of Midland and his wife made their way to the stage to claim their new riches.  Jeff’s wife appeared overwhelmed and in disbelief this was even happening.  Jeff was high-fiving the staff and soaking in the moment on stage, and what a moment it was!  $200,000 to help them along with their journey together with their three children.  A night to remember, and a good time had by all!  Cheers to 28 years! 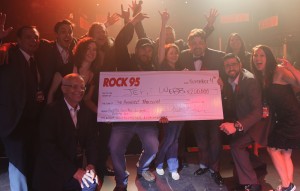