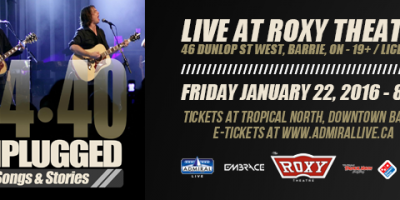 This Friday night, 54:40 brings their Le Difference Tour to Barrie. Their new unplugged album Le Difference: A History Unplugged was released on January 8th and the guys are on the road in support of the new album and their live show stops down at the Roxy Theatre in downtown Barrie.

The new album and stage show is an intimate and unplugged reimagining of 54:40’s greatest hits recorded as you’ve never heard them before. Featuring original arrangements of violin, guitar, banjo, mandolin and more by Daniel Lapp, History gives new context and spirit to 10 classic songs fans all know and love. Re-approaching songs from the past is something the band had never thought they would do, but they have and you can see all of these re-worked songs in an intimate setting Friday night at the Roxy Theatre in Barrie.

Be listening with ROCK 95 to win tickets, and be listening for 54:40 and a live studio appearance on the Live Song of the Day Friday afternoon at 3:30pm on ROCK 95.